Megan, along with her mother and husband, discuss her struggles with the unpredictable nature of AHP.

The following video represents the experience of one patient with acute hepatic porphyria (AHP). AHP is a rare, genetic condition that can cause unpredictable attacks and, for some people, chronic symptoms. Acute attacks usually first occur between the ages of 18 and 45. These disease manifestations may not be reflective of other patients’ presentation of AHP.

Megan:There were times when I just felt so low that I didn't want to go on anymore. It kind of like felt like the rug had been ripped out from under me. [Lower third on screen to read: Megan Living With Acute Hepatic Porphyria (AHP)]

Diana:It's an evil disease. Yeah. And it's been really mean to my Megan.  And I worry about what all her little body has been through.  [Lower third on screen to read: Diana, Mother and Caregiver to Megan]

Jason:Men by nature, we want to fix things, okay? And I think the hardest part to realize is, you can't fix this. [Lower third on screen to read: Jason, Husband and Caregiver to Megan]

Megan:I mean I would estimate that I probably saw at least a couple dozen specialists and doctors, if not more in the process to diagnosis. You know, my mother took me to every doctor that she could get to listen to us, and we just kept going, and going, and going.

You know, they had me in to do a colonoscopy a couple of times. They performed biopsies on my liver and kidneys. They thought I had low blood sugar because I was fainting, kidney stones, then bipolar disorder, clinical anxiety, and depression.

Diana:It was just a puzzle I was trying to put together, and it turns out after she was diagnosed with porphyria, it all made sense.

Jason:Tuesday's porphyria could be she can't get comfortable in her own skin no matter which way she lays.

And then Wednesday's porphyria can be she can't get too far away from the bathroom because she's so nauseous and she hasn't eaten or drinking anything and she's starving. And then Thursday's porphyria could just be downright pain, and by Friday she could have all of that or any combination of it going on at one time. And then the fatigue of not sleeping, and then there's confusion, there's agitation. It's just tough. It's not fair.

Megan:One-third of the years on this Earth I will have spent in the hospital if I continue going as frequently and as often as I do now.

When I think about lost time, of course I think about not being able to go to a good friend's wedding, or missing out on Christmas and Thanksgiving because I'm in the hospital. Those are big things for me as far as time. Feeling robbed of a career that, you know, I've spent four years in college working toward. I just was kind of stagnant in this one place with porphyria.

Diana:At first, I think people thought Megan was drug seeking, and a porphyria patient is not drug seeking.

Megan:And it was frustrating, hearing people starting to say that I was making it up, or that I was just lazy.

Jason:The stigma of, “Yeah, I hear you're sick but you don't look sick.”

Megan:It's very frustrating. If somebody had severe depression, you wouldn't say, ‘Well you don't look depressed.’  What is sick supposed to look like?

Diana:My daughter's my biggest hero for what she's been through. She's my Wonder Woman. She's awesome.

Megan:When I think about the future for porphyria, like the number 1 adjective that I'd use right now is hope.

Regina’s battle with variegate porphyria (VP) kept her from running. Now, she’s back to running life on her terms. 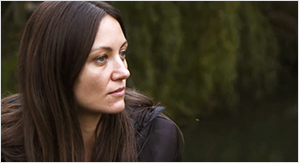 Ania discusses how acute intermittent porphyria (AIP) has affected 3 generations of women in her family with severe attacks and agonizing pain.

SIGN UP to receive updated information about AHP from Alnylam.

All fields are required.

Thank you for connecting with us.

One step away! You will receive an email shortly to verify your information and complete enrollment for AHP updates for Alnylam.

You will be directed to a website for a prescription medicine used to treat acute hepatic porphyria (AHP) in adults.

This email address is already in use.

Please press Cancel to enter another email, or press Update to receive an email that will allow you to update your preferences.

A link has been sent to your email address